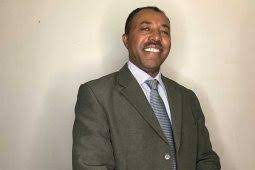 It is with great sadness that we announce the passing of former Southam Journalism Fellow, Aaron Berhane. Shockingly, Aaron died after a sudden illness in an Intensive Care Unit in Toronto on Saturday, May 1st.

Aaron was awarded the 2003/04 Donner Canadian Journalists for Free Expression Fellowship at Massey after only having arrived in Canada a few months before. Originally from Eritrea, he was co-founder and editor-in-chief of Setit, a newspaper that criticized the repressive Eritrean government whose forces subsequently raided and permanently shut down the paper’s office in Asmara. He was able to hide in the city for some months and eventually escaped over the border to Sudan.

Aaron’s wife, Miliete, and their three children remained in Eritrea in fear of their lives since any connection with him at all would put them in danger. The family was spied on constantly to try to determine Aaron’s whereabouts. In 2003, when he was offered the Journalism Fellowship, his family had managed to flee to Sudan and it took several more years for them to get to Toronto. Their youngest was now eight. Needless to say, after eight years, there was great joy when they were reunited.

After the fellowship, Aaron went on to open his own impressive Eritrean newspaper in Toronto, Meftih, published in Tigringa and English. He was determined to educate new Eritrean Canadians about life in Canada and that included daily news along with history and politics. While running his newspaper, Aaron became a Canadian citizen, completed a Master’s degree in Immigration and Settlement Studies at Ryerson, received the 2019 Humber College’s PEN Writer-in-Residence fellowship and, the year after, he was appointed Chair of the Writers-in-Exile Committee at PEN Canada. During his PEN Residency at Humber, Aaron began working on his memoir.

Those who knew Aaron will realize what a terrible loss his death is. To Miliete, their daughter Frieta and her husband Abel, and sons Mussie and Eiven, we send our deepest sympathy and courage.