Massey College was a conscious attempt to create a small, close community of graduate students from different disciplines. From the street, only the brick exterior built as an Oxbridge quadrangle is visible. The entrance is marked by the college’s coat of arms carved in limestone. Beyond the porter’s gate, the grassy and leafy quad is enclosed on three sides by three floors of student rooms.

The college residence accommodates about 60 graduate students, as well as up to 10 visiting scholars. The rooms are grouped in five separate “houses,” each with its own entrance. All the rooms look into the quad. All rooms include a small bedroom as well as a study, and some of the senior suites have fireplaces.

The fourth side comprises the Junior Common Room, the Upper Library, a large dining hall, a small private dining room, the Robertson Davies Library as well as the Principal’s residence.  The Robertson Davies Library includes a collection of working 19th century printing presses and rare book collection. The library’s Bibliography Room has the largest collection of wood type in North America (some 350+ pieces). Massey is also home to a chapel, whose interior was originally designed by theatre designer Tanya Moiseiwitsch. It was extensively redesigned in 2006 by Brigitte Shim and Howard Sutcliffe, and in 2017, the Chapel was designated as the first interdenominational and interfaith Chapel Royal in Canada.

The dining hall of Massey College is both imposing and surprisingly intimate. It is lit by high windows, an arrangement that recalls a medieval hall. He also designed the wooden tables and chairs, as well as the decorative cast-iron grilles that cover the air vents. There is a massive brick fireplace on the east side. A frieze below the windows carries a long quote from George Santayana rendered in medieval calligraphy. The quote ends: “To be happy you must be wise.” The inscription on the bell in the college tower—the Bell of St. Catharine, patron saint of learning—is “I summon the living: I mourn the dead: I rouse the sluggards: I calm the turbulent.” 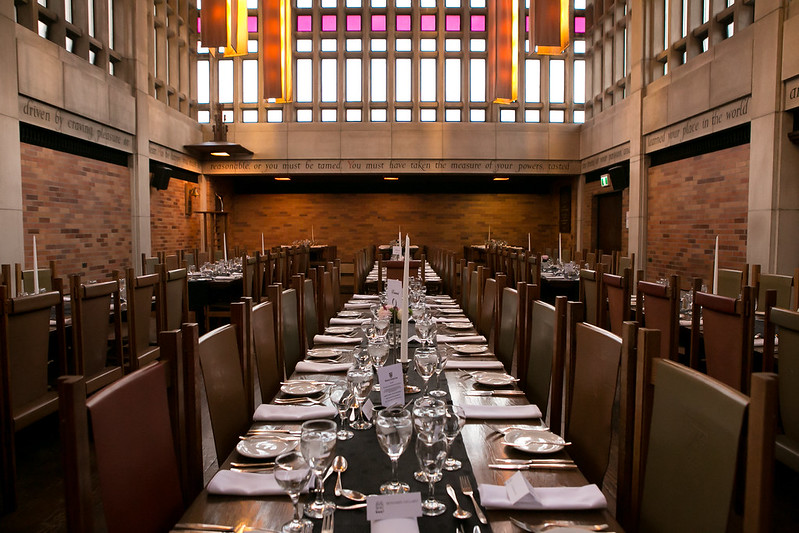 The designer of this unorthodox building, especially for the 60s when brutalist architecture dominated on university campuses, was Ron Thom, who graduated from art school and joined a Vancouver architectural firm as an apprentice. His lack of a formal architectural education influenced his approach to design. At the time he designed Massey College, Thom was 35 and an experienced designer with more than 40 houses under his belt. According to Ralph Bergman, who worked for Thom in the 1970s, “Ron didn’t necessarily believe in the things we were taught in school—truth to materials, clarity of structure, and so on. He had in mind to create spaces and environments, so anything necessary to achieve this was okay with him—and he was very good at it.”

What seems to have guided Thom were not abstract ideas, but something more down-to-earth: the human experience of a place. He was not a functionalist. “The architect in proposing a building makes a choice—an imaginative choice which outstrips the facts,” he wrote in a 1962 Canadian Architect essay. “The creativity of architecture lies here; it imagines more than there is grounds for and creates relations which at bottom can never be verified.” He added, somewhat defensively: “An architect, no less than an artist, should be willing to fly in the face of what is established, and to create not what is acceptable but what will become accepted.”

Thom’s approach appealed to Vincent Massey, whose family owned the agricultural equipment giant, Massey Ferguson. As a young man, he had conceived and financed Hart House, the university’s Gothic Revival student center. Massey College was one of his last philanthropic projects.

The 2013 Landmark Award was awarded to Massey College by the Ontario Association of Architects. “Recognizing buildings that demonstrate architecture’s beauty, endurance and lasting contribution to the community and to society”, a Landmark building “establishes a design excellence standard for future generations, enhances its environment and the public realm, recognizes and respects its surroundings; and contributes to the neighbourhood, the community or the city through its unique identity.” In 2013 Fall 2013 issue of Perspectives magazine, published by OAA, was dedicated to Ron Thom and featured Massey College. In 2014 the travelling exhibition Ron Thom and the Allied Arts was organized by the West Vancouver Museum in collaboration with Trent University and Massey College. In Toronto, the exhibition was held at the Gardiner Museum.

Adapted from various sources, including the article by Witold Rybczynski (Architect Magazine, July 2015)