Working under the leadership of Dr. Barbara Sherwood Lollar, Science at Massey aims to develop programs, round tables, seminars and linkages for the broad discussion of scientific issues, research, policies and challenges. Working closely and collaboratively with Junior Fellows in the interdisciplinary ‎ tradition of Massey College, Dr. Sherwood Lollar will help lead and encourage robust science-related events and discussions at Massey open to the entire Massey community.

To join an e-list to receive further updates please feel free to email barbara.sherwoodlollar@utoronto.ca with the subject heading “Science at Massey 2020-2021″. 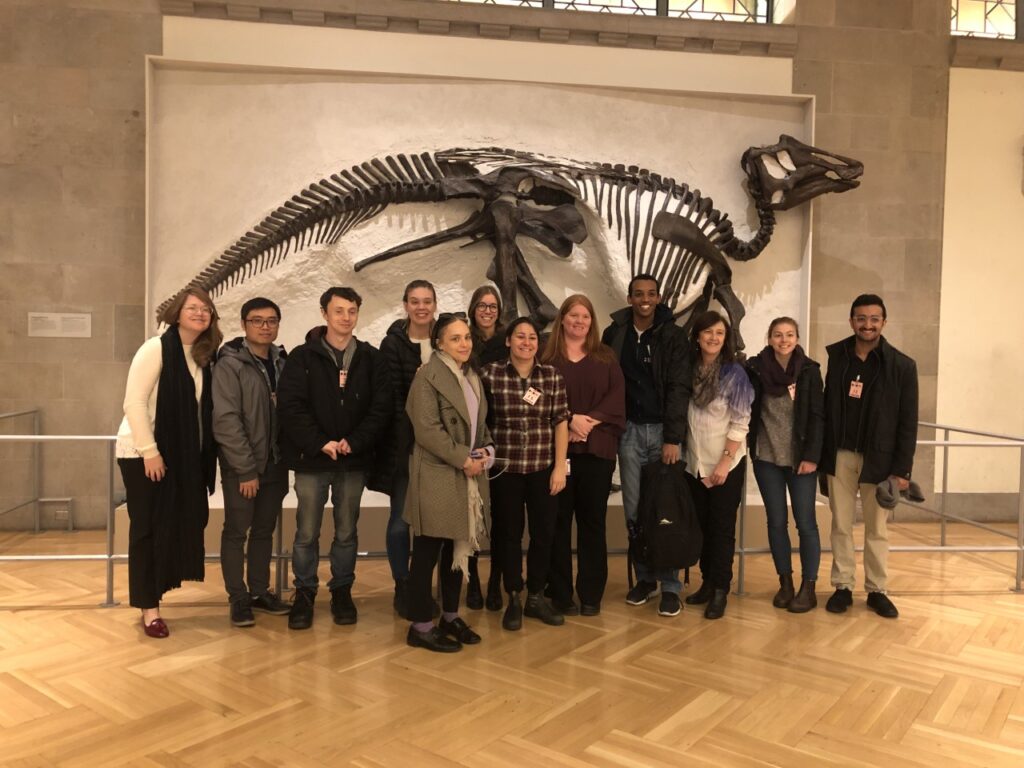 Career Transitions and Next Steps on the Journey:
Insights and Lessons Learned on the Path forward from Graduate Studies

RSVP by emailing eferranti@masseycollege.ca or just connect with the Zoom details below

Every year Massey College hosts the Ursula Franklin Forum, on a topic on the intersection of Science, Engineering, Public Policy and Society. This year two panels will provide their insight and experience and provide a mentoring event for Massey College Junior Fellows. The first panel of faculty including those early in their careers will discuss a wide range of topics from job hunting, interviewing, laying a successful foundation in a new employment opportunity, to building strong and supportive networks. The second panel will feature current and recent graduate students, postdoctoral fellows and early career faculty providing insights into graduate school and postdoctoral opportunities, finding (and making a success in your graduate and postdoctoral work), and planning for next step career transitions.

In addition to panel discussions there will be ample time to virtually meet and exchange ideas with the panelists.  Make this the first step on your own career progression plan and find out how to help build a path to your dreams.

1:15-1:45 pm Panel I Opening comments and introduction to their personal career progression with focus on the lessons learned from managing career transition (in the past as well as future transitions)

2:30- 3:15 Panel II Opening comments and introduction to their personal career progression with focus on the lessons learned from managing career transitions from undergraduate to Masters to Doctoral and to Postdoctoral positions.

3:50 pm Closing Comments and encouragement to engage as a Mentor or Mentee at Massey - Elena Ferranti

Adrian De Leon is a poet, educator, and historian at the University of Southern California, where he is an Assistant Professor of American Studies and Ethnicity, and serves on the steering committee at the Center for Transpacific Studies. His research investigates race, indigeneity, and migrant labor in the Philippines and its global diasporas. In 2019, he received his PhD in History at the University of Toronto, where he was also a Junior Fellow and Don of Hall at Massey College. His research on Philippine indigeneity and migration received the Governor General's Gold Medal, as well as support from SSHRC and the Fulbright Scholarship. He is the author of Rouge (Mawenzi House, 2018) and barangay: an offshore poem (Wolsak & Wynn, 2021), and is the co-editor of FEEL WAYS: A Scarborough Anthology (Mawenzi House, 2021). His work has been featured in National Geographic, The Conversation, ABC7 Eyewitness News, ABC Nightline, Los Angeles Times, and Rolling Stone.

Daniel Taylor is Associate Professor of Voice and Opera and Head of the Historical Performance Area at the Faculty of Music, University of Toronto. His scholarship and teaching include exploring the relationship between performance and well-being leading to the building of healthy and sustainable technique. Daniel is a Visiting Faculty Member of the Siena Liberal Arts University (Italy), Victoria Conservatory of Music in British Columbia (Canada), Casalmaggiore (Italy), the Académie Fourvière Lyon (France) and Amalfi Opera (Italy). He has given guest masterclasses across Canada and internationally. He is Artistic Director and Conductor of the Choir and Orchestra of the Theatre of Early Music and of the Trinity Choir. Appointed as an Officer of the Order of Canada, his citation read: "one of our country's most celebrated cultural ambassadors, distinguishing himself with moving performances and known for his warmth and humour. (photo credit: Jazmina Alzaiat Photography).

Edith M Hillan PhD, FAAN After qualifying as a nurse and midwife, Edith worked in clinical practice, research and education. She moved to the University of Toronto in 2001 and before this held a Personal Chair of Midwifery at the University of Glasgow, Scotland UK. Her current academic appointment is held in the Lawrence S Bloomberg Faculty of Nursing at the University of Toronto where she is Director of the Doctoral Programs. From 2004-16 she served two successive terms as Vice-Provost at the University of Toronto where her major area of responsibility was academic personnel issues, particularly in relation to Faculty Renewal and Faculty Life Issues such as recruitment, appointment, tenure, promotion etc., across the three campuses. Her current research examines the health of women and newborns from a global perspective. She is particularly interested in technologies which can improve access to high quality healthcare in rural and remote settings and aim to end preventable deaths of mothers and neonates. She is a Senior Fellow of Massey College and also serves as a member of the Governing Board.

Alia Weston is an Associate Professor of Creative and Business Enterprise at OCAD University. She is a practice-oriented scholar combining her applied research/teaching in business and her practice as a jewellery design. Through her scholarship Alia explores the intersection of business, creativity and social change. Using a critical perspective, she questions dominant paradigms and redefines how we understand knowledge; exploring themes such as critical business, creativity in resource constraints, social innovation, and experiential food methodology. She uses the Alia Weston Jewellery and Fireflies Atelier brands as a living case studies, teaching OCAD U students about the how-to aspects of running creative businesses. Prior to this, Alia held a faculty position at the University of Strathclyde in Glasgow, UK teaching organization theory and creativity to business students.

Elodie Passeport is an Associate Professor at the University of Toronto, and Tier II Canada Research Chair in Environmental Engineering and Stable Isotopes. Dr Passeport is cross-appointed in the departments of Civil and Mineral Engineering, and Chemical Engineering and Applied Chemistry. She obtained her PhD in Water Sciences in 2010 from AgroParisTech in France, and then conducted a postdoc in the Plant and Microbial Biology department at UC-Berkeley and one in the Earth Sciences department at the University of Toronto.

Ann Ojeda is an Assistant Professor in the Department of Geosciences at Auburn University. Her PhD is from University of Oklahoma and she completed a postdoctoral fellowship at the University of Toronto. She studies the dynamics of human-environmental systems at the intersection of geology, environmental science and engineering, and public health. Her research focus is in water contamination and the ways in which water quality affects community health.

Alero Gure completed her PhD at the University of Wyoming and is currently a Postdoctoral Research Fellow in the Earth Sciences department at the University of Toronto. In a broad sense, her research interest is in the dynamics between living organisms, their energy sources, and the resulting interchange with the environment. Currently, she is combining geochemistry and microbiology to identify new connections and differences between abiotic and biotic processes occurring in Earth’s deep subsurface; to translate fundamental studies on multiscale processes (e.g., fluid-rock-microbe interactions) to large-scale applications (e.g., nuclear waste disposal, emergence of life on Earth and other planets).

Si Yue Guo is a postdoctoral research associate in physical chemistry in Prof. Alan Aspuru-Guzik's group at the University of Toronto where she is developing a new approach for computation using chemical reactions. An alumna Junior Fellow of Massey College, she has a Joint Honours BSc in Physics and Mathematics from McGill University and a PhD in Physical Chemistry from the University of Toronto, where she studied chemical reaction dynamics at crystal surfaces in Prof. John Polanyi's lab.

Join us for the 4th Annual Ursula Franklin Forum tackling a series of topics united under the theme of trust in science and engineering and the challenge of developing partnerships and community trust in the topical areas of public health policy (touching on the anti-vaccine movement, and the recent coronavirus outbreak); societal challenges surrounding social and public partnerships to tackle climate change and waste disposal; and the intersection of AI with public trust and expectations.

10 min presentation from each panelist on their background, engagement and perspective on how this issue impacts their activity and professional engagement

Second Part of the Forum:

Maya Goldenberg is an Associate Professor of Philosophy at the University of Guelph. Her research in philosophy of medicine and philosophy of science examines the intersection between science and values in both institutional and public domains. She is author of a forthcoming book on vaccine hesitancy and public understanding of science, A Crisis of Trust: Vaccine Hesitancy, Science, and Public Debate (University of Pittsburgh Press).

Jennifer McKelvie is the Toronto City Councillor for Ward 25, Scarborough Rouge-Park. She has been designated as Mayor’s Resilience & Environmental Champion and in that capacity has taken an active role in the City of Toronto’s climate change, resilience and ravine strategies. Before entering politics, Jennifer managed research partnerships at the NWMO and CIFAR. She obtained her training as an environmental geoscientist at the University of Toronto (PGeo, PhD).

Elissa Strome is the Interim VP Research and Executive Director, Pan-Canadian AI Strategy, CIFAR and works at the interface of strategy, policy and leadership. From 2008 – 2015 she held senior leadership positions at University of Toronto’s Office of the Vice-President, Research and Innovation, advancing major institutional strategic research priorities, including establishing and leading the SOSCIP research consortium. She is a member of the Federal Government’s AI Advisory Council.

Bob Watts is the Vice-President of Indigenous Relations at the NWMO. He has worked on a broad range of Indigenous issues at the regional and national levels for many years, including working to establish the historic Indian Residential Schools Truth and Reconciliation Commission. The focus of his work includes examining ways the NWMO can the contribute to the reconciliation process in Canada, finding ways to ensure partnership is the cornerstone of relationship building with Indigenous and municipal communities and leading both policy and practical processes to interweave Indigenous knowledge and western science. Watts is also a former CEO of the Assembly of First Nations, served as the Chief of Staff to the Assembly of First Nations‘ National Chief Phil Fontaine, and is a former Assistant Deputy Minister for the Government of Canada. He is a graduate of the John F. Kennedy School of Government, Harvard University and fellow at the Harvard Law School. Mr. Watts is from Mohawk and Ojibway ancestry and is a member of the Six Nations Reserve.